Where is my political home?

David French was at the top of his game as a socio-legal pundit Sunday. It’s hard to know what to excerpt, and you really should read it all.

But excerpt I feel I must.

After registering his concerns with the new Texas abortion law, he turns "meta":

I don’t think most Americans appreciate how much the debate over abortion has changed in the last thirty years of American life. Two changes are particularly important. One is profoundly negative, and the other is extraordinarily positive.

First, the legal and political debate over abortion has become purely partisan at exactly the time when our nation’s profound polarization means that party affiliation is becoming central to millions of Americans’ personal identities.

Thirty years ago there was a robust pro-life wing of the Democratic Party. Even 15 years ago, when I moved back to Tennessee, my congressman was a proudly pro-life Democrat. My heavily Republican district voted him out in 2010. It preferred a “pro-life” candidate who faced evidence that he tried to pressure a girlfriend to abort their child and supported his ex-wife’s two abortions.

And now? Elected pro-life Democrats are very, very hard to find. Even worse, as the parties move away from each other on a host of important political issues—and as the GOP continues to embrace Donald Trump and his ethos and contains an ever-expanding coalition of cranks and radicals—it is increasingly difficult to ask Democrats to lend any aid and comfort to a party that they find unmoored from even basic decency, integrity, and truth itself.

Or, as I’ve heard so many believers from many faiths say: “I’m pro-life, and I want the law to protect the unborn. I welcome refugees. I want to address the contemporary reality and persistent legacy of racism. I want politicians to be people of good character and fundamental integrity. Where do I go? Where is my home?”

(Emphasis added) Abortion was not my personal breaking point with the GOP, but I spent at least a decade politically homeless, and my new home is a third party (and ipso facto quixotic).

Third Commandment?! Is that old thing still around!?

My plea to my fellow Christians: If you insist on refusing the vaccine, that is your right. But please do not bring God into it. Doing so is the very definition of violating the Third Commandment, “Thou shalt not take the name of the Lord thy God in vain.”

The reader, the author, and the young traveler

I had meant to live like a tramp or a pilgrim or a wandering scholar, sleeping in ditches and ricks and only consorting with birds of the same feather. But recently I had been strolling from castle to castle, sipping Tokay out of cut-glass goblets and smoking pipes a yard long with archdukes instead of halving gaspers with tramps. These deviations could hardly be condemned as climbing: this suggests the dignity of toil, and these unplanned changes of level had come about with the effortlessness of ballooning.

Patrick Leigh Fermor, Between the Woods and the Water, which recounts one leg of his walk across Europe — this time, central Europe — in the 1930s, before storm clouds of war were mounting.

The passages describing his sojourns among the patricians of Middle Europe are among the happiest in the book, but among the saddest too: for we know, as the author knows, but as the young traveller never did, that all that happy, reckless and cultivated society, which answered his knocks at the door with such instant generosity, was doomed. Within Paddy’s own lifetime, it would be eliminated.

(Introduction to the book)

Did Texas Hand Biden a Lifeline?
By Matthew Continetti The unpredictable politics of abortion in 2022 and 2024.

Good question. Since I let my National Review subscription lapse, I don’t know Continetti’s answer for certain. But Afghanistan was a blow to Biden, until our amnesiac press decided that the quirkey-to-the-Nth-degree Texas abortion law would sell more papers, get more clicks.

I’m no longer privy to high-level pro-life litigation strategy as I once was, but I very much doubt that any law like Texas’ was a part of it. This was Texas being contrary, independent Texas!.

Another possible unintended consequence of the Texas heartbeat law: if the Supreme Court upholds Mississippi’s ban on abortions after the 15th week in its upcoming Dobbs case (which would put us in line with Western Europe), the result may be hard to portray as extreme.

Not the village I’ve seen …

I have seen the village, and it don’t want it raising my child.

… and sure as hell not Los Angeles!

Astonishingly, the reporter on this story, Jason McGahan, said of this woman 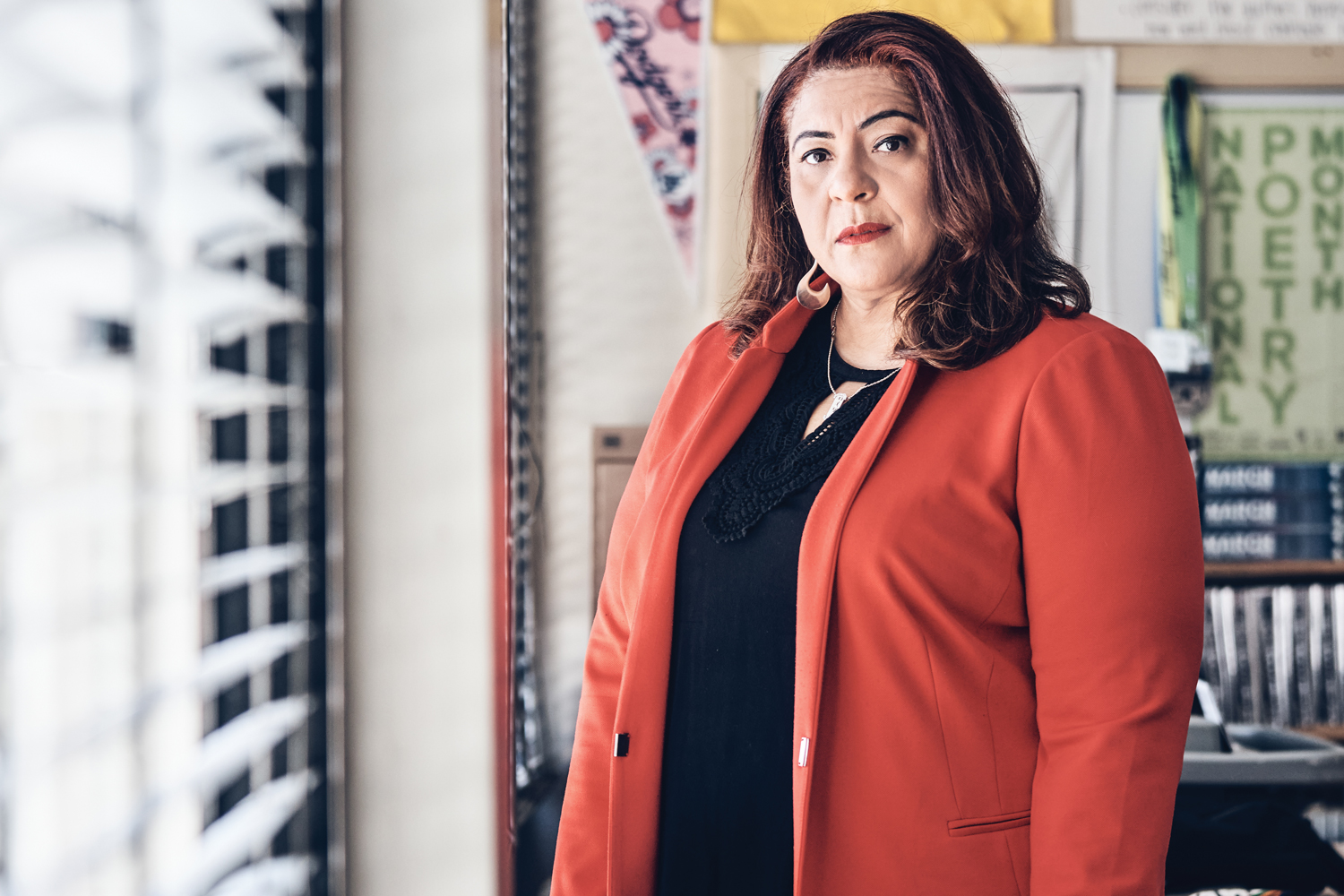 She doesn’t look much like a firebrand. Short and stout, with sparkling brown eyes, brightly painted pink lips, and copper-red, shoulder-length hair, she’s a Central Casting version of a kindly, cuddly school teacher.

McGahan must have gone to a really tough school. She looks to me like a Central Casting version of a villainous (villainess?) woman pro rassler.

Fundamentalism then and now

I am thinking about moving to Texas so that I can be in open disagreement with the powers that be and express this freely, instead of living in colonies of liberal progressives where I must put tape over my mouth except when among close personal friends. Freedom of speech is watched closely where I live and we all know it. “What exactly is it you want to say that you can’t?” you wonder. It is something that, were I to say it, I’d be kicked out of the Democratic Party and my library card would be confiscated and I’d be barred from Amazon and Starbucks and the Episcopal church would make me sit in the Penitents’ Corner. So I’ll keep it to myself.

I grew up fundamentalist so I’m familiar with the drill. We couldn’t join marching band because we believed that rhythmic movement would lead to dancing, which then led to fornication. We never sang uptempo hymns, only dirges. Women kept silent in church because the sound of their voices would lead men to think impure thoughts. So the rigidity of progressive righteousness is familiar to me. I can live with it. I know which friends can be trusted and which cannot.

I’m not so sure, Gary. Merely acknowledging that today’s progressives are every bit as prim and uptight as yesterday’s fundamentalists might get you cancelled.

I sure hope I’ll be able to drop the subject if the Orange One rules out a 2024 run, but meantime some reminders are in order:

The Bulwark is a website (news and commentary — mostly the latter) that arose to oppose Trump from a conservative (neocon, it seems to me) perspective. On January 4, Mona Charen (who I’ve loved for decades) righteously ripped into the Wall Street Journal for its record during the Trump years:

In the Trump era, the Journal’s editorial board has betrayed its readers. It has trimmed and hemmed and to-be-sured its way through the most sustained assault on truth and the American political order of our lifetime. Every now and then—usually on textbook economic matters like tariffs—the board has issued stern rebukes of the president’s policies. But rarely. For the most part, it has retreated into anti-anti-Trumpism, averting its gaze from the president and focusing disproportionately on his opponents.

Today, the Journal concedes, “too many Republicans refuse to accept Mr. Trump’s defeat.” They note that the Senators who have agreed to contest the Electoral College count this week cite no evidence of fraud, “Instead they cite ‘allegations of fraud and irregularities’ that feed ‘deep distrust’ of the results—distrust they and the President are feeding.” So far, so good. But then, in a typical misfire, the editors caution that “this is a . . . lousy political strategy for returning to power.” Ah. So that’s the main issue then?

The president of the United States is attempting to subvert the democratic process. He is calling on his followers to swarm Washington, D.C., on January 6. For what conceivable purpose?

I particularly loved "trimmed and hemmed and to-be-sured its way through the most sustained assault on truth and the American political order of our lifetime", which is pitch-perfect.

But the main point is that no good ever could ever have come from "calling on [Trump’s] followers to swarm Washington, D.C., on January 6" and the Wall Street Journal covered itself with feckless shame for not saying so.

Dehumanizer to the core

What is it that I want from government, exactly?

The answer my brain keeps coming back to is in reference to something my guy Jeb Bush used to say about education. He wanted every child to have the opportunity to live a life of purpose and meaning. And that’s basically what I want from our government and society.

Donald Trump created a party that didn’t even pretend to care about dignity and purpose.

Trump saw Republican voters as customers who needed to be attracted to his brand. And if his customers wanted a brand identified with being as cruel as possible to other humans, then it was cruelty he would sell. Banning people from entry into the country if they are Muslim does not have a pro-human dignity side to the argument. Neither does separating parents from their children at the border. Or cheering on killer cops. Or grabbing women by the pussy against their will. Or trying to cancel the votes of people who live in a city with a lot of blacks.

Trump’s entire essence is in direct conflict with the notion that people have dignity. He is a dehumanizer to his core.

Tim Miller at The Bulwark

I was a young fan of Bill Buckley’s polysyllabic erudition, and cheered when Buckley threatened to “sock [Gore Vidal] in the goddam mouth.” But is Vidal’s later conspiracy theorizing looking prescient?