Last Monday’s post suggested that neutralism and agnosticism are merely poses.  Although their proponents claim not to believe anything either way concerning God, actually they suppose that it does not matter and cannot be known whether there is a God.  This supposes plenty about God.  At the least, it supposes that what Christians believe about Him is false on all points, because they hold that He can be known, He desires to be known, He has provided the means to know Him, and whether we believe in Him matters.

Lately, though, I have been reading some of the works of the early twentieth century Catholic writer Hilaire Belloc.  He would have said that neutralism and agnosticism are merely examples of a much broader challenge to faith and sound thinking, which he calls, with some misgivings, the Modern Mind.  Here is how he defines the mentality in Survivals and New Arrivals (1929):

The mark of today’s Main Opposition, differentiating it from nearly all the perils of our Christian past, is that it propounds no explicit heresy.  Its conflict with the Faith is a conflict of mood; it is a conflict following on a certain mentality, not on any body of propositions.  In the case of all the old heresies a definite series of propositions came at the origin of the affair; a conflict of moods followed.  An anti-Catholic habit of mind was produced, with all its consequences in a myriad social customs and in all the atmosphere of a society, but at the root lay perfectly clear doctrinal postulates which could be discussed in the abstract and accepted or denied without reference to their possible indirect effects …. With each section of the Main Opposition today it is the other way about.  You may by prolonged analysis extract from its moods its ultimate principles, but the moods do not start from those principles.  Their victims are not conscious of any such principles.  When presented with them, they will often, and honestly, deny them to be held.

(J. Budziszewski, The Empire of Mood over Mind) This whole little essay is stunningly perceptive. The only thing that might have improved it would have been an epigram from Robert P. George’s Twitter account yesterday:

Courageous Christians like these Coptic girls will be slaughtered or orphaned as a result of our indifference. Perhaps they’ll be forced to kneel on a beach for their beheadings, like the 21 Coptic martyrs in the icon on my office wall — every one of whom was offered a chance to apostasize to Islam and every one of whom refused, dying with Christ’s name on their lips.

Do you wonder why I have occasional kindly thoughts toward Russia? 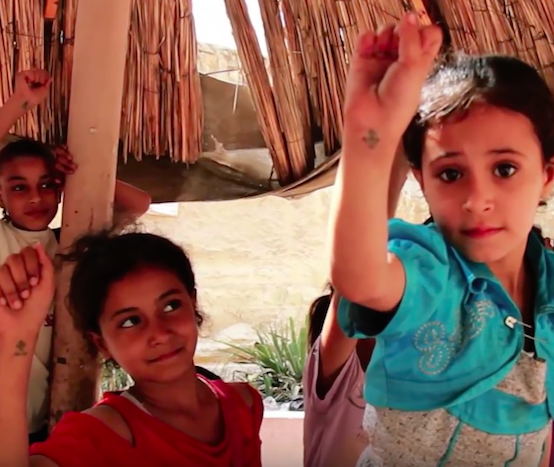 Not only is that cold indifference toward persecuted Christians a bipartisan evil, conservative “Christians” like Ted Cruz can be the worst offenders, as he infamously turned his back on their defense when he heard murmurs of disapproval of his gratuitous and provocative remarks in defense of Israel at a gathering explicitly “In Defense of [Middle-Eastern] Christians.”

Rod Dreher has a longish interview with Andrew Doran, vice president and policy adviser “for In Defense of Christians, a Washington-based non-profit that advocates for human rights for the besieged Christian minority in the Middle East.” Yes, it’s the same group Ted Cruz contemned.

For Middle-Eastern Christians, every day is 9/11. Excerpts:

Millions of Christians across the region live under a daily threat—especially on Sunday.  Butthey show up at church every Sunday.  They’re the toughest people I’ve ever encountered in my life. There’s a reason ISIS targets them …

From a strictly political point of view, what do Americans not understand about the situation Christians in the Middle East face — not just in war zones, but elsewhere?

Americans probably don’t understand the extent to which their public servants in DC really don’t care.  The foreign policy establishment, like the public culture in America, has a general contempt (often masquerading as indifference) for Christians.  This is ironic because the Christians are the progressives of their societies in the Middle East.

I’d like to ask the same from a religious point of view. Many, perhaps even most, American Christians don’t seem to understand that Middle Eastern Christians exist.

That’s very true.  There is a culture gap between American Christians and Middle East Christians, similar to that which existed between Greek and Latin churches around the time that Constantinople fell to the Turks.  Refugees flooded into the West, bringing with them the cultural heritage of the East.  As I wrote in TAC last year, something similar is happening in our own age.

Why have the US news media not been especially interested in the plight of Middle Eastern Christians?

Ross Douthat put it well a few years ago when he said that Middle East Christians are too Christian for the left and too Middle Eastern for the right.  The media has actually gotten better about covering this in recent years but there’s a fairly significant bias against Christians in America’s public culture.  Our elites have been conditioned to believe that there is a perpetual victim-oppressor dialectic—and that they, the elites, are somehow the victims.  Of course, some progressives do recognize that Christians are their natural allies.

In Iraq and Syria this summer, I spent time with some European journalists, all of whom were (I think) post-Christian.  They recognized that the Christians were progressive, moderate, and vital to the future of the Middle East.  There are many reasons that might account for the different attitudes of European and American elites toward Middle East Christians, but I think the simplest explanation is that Europeans don’t have a peculiar messianic urge to Americanize the Middle East.

I’ve been shocked to learn that so-called “conservative” foreign policy think tank types were fine with the eradication of Christianity in the Middle East so long as there was procedural democracy.  The hatred of ISIS for other religions has at least some kind of logic.  The hatred of elites for Christians—in the Middle East or here—was in many ways more demoralizing.

Almost 20 years ago, in New York City, I attended my first Maronite (Lebanese) Christian mass, and was unnerved to hear ancient prayers chanted in Aramaic, the language of Christ.It struck me that the ancestors of these people were worshiping Christ at the time my European ancestors were still praying to pagan gods. What do Western Christians owe to Christians living today in the lands that were among the first to receive the Gospel?

In general, we have very different understandings of God.  American Christians seem to worship Bourgeois Christ, the god who blesses the chosen with prosperity and comfort.  It’s easy for someone who thinks this way to conclude that those who suffer deserve it—which should be a revolting thought for a Christian.  This thinking is so deeply ingrained that I’ve even heard American Catholics express this idea.  There’s overlap, I suppose, with what you’ve called Moralistic Therapeutic Deism.

Middle East Christianity is very different.  There’s a depth, courage, and authenticity to their faith that I can only admire.  They, like many Eastern Christians, have been the victims of often violent religious persecution for much of their history.  They’re very tough people—Maronites, Copts, Armenians, Chaldeans, Syriacs, Assyrians—but they’re also committed to their homeland.  Theirs is the birthplace of Christianity.

Every so often someone will say, “The Christians should just leave,” as if they were living on a flood plain, rather than the victims of deliberate human action ….

[T]he most important reason for this lack of a definitive quantitative answer is that they pose qualitatively different dangers.

History has set limits on how far to the extremes of the hard right reasonable right-wingers are prepared to go. Following the horrors of the Holocaust and Southern lynchings, no one claiming the mantle of conservative is willing to be associated with Nazi anti-Semitism or the KKK. Neo-Nazi and Klan speakers are not invited to university campuses.

The hard left lacks comparable limits. Despite what Stalin, Mao, the Castros, Pol Pot, Hugo Chavez and North Korea’s Kims have done in the name of communism, there are still those on the left—including some university professors and students—who do not shrink from declaring themselves communists, or even Stalinists or Maoists. Their numbers are not high, but the mere fact that it is acceptable on campuses, even if not praiseworthy, to be identified with hard-left mass murderers, but not hard-right mass murderers, is telling.

The danger posed by the extreme left is directly related to its more benign goals, which seduce some people, including university students and faculty. Believing that noble ends justify ignoble means, they are willing to accept the antidemocratic, intolerant and sometimes violent censorship policies and actions of Antifa and its radical cohorts.

Piers Morgan, one of Britain’s best-known journalists, has the face of an overweight choirboy and the manners of a starving wolverine. He sniffed blood when [Jacob] Rees-Mogg declared forthrightly that he was not in favour of same-sex marriage – which is legal nowadays in England, Wales and Scotland. After a warm-up question on Brexit, Morgan dug his claws into Rees-Mogg’s views on same-sex marriage, homosexuality and abortion.

Surprisingly, there was no fumbling and no waffle.

“I’m a Catholic and I take the teachings of the Catholic Church seriously. Marriage is a sacrament and the decision of what is a sacrament lies with the Church not with Parliament,” Rees-Mogg responded with unflappable aplomb. “This is exactly the argument that Thomas More made in opposition to the marriage of Henry VIII and Anne Boleyn.”

Catholics defend a bond between one man and one woman because it is good for everyone, not just Catholics. It protects the dignity of the woman; it creates the best place to raise children; it expresses the human desire for a lasting, loving union. All times and all cultures, or nearly all cultures, hold this ideal in esteem.

The view of the Catholic Church is that marriage, the publicly recognised union between one man and one woman and their children, is a pre-political institution which the state can regulate but has no power to change. Marriage between Christians was given an additional dignity when Christ made it a sacrament. But marriages between Hindus, between Muslims, between Buddhists, and even between atheists are still marriages.

The view that the Catholic Church is defending predates Christianity. The Romans worshipped Jupiter and Venus and past emperors but they had the same idea. One of the great Roman jurists, Modestinus (a pagan), wrote in the 3rd Century AD, “Marriage is the union of male and female and the sharing of life together, involving both divine and human law” (Digest 23.2.1).

When Rees-Mogg and others defend a traditional view of marriage only because it is a sacrament and not because it is a natural good, they imply that it is a peculiar institution with rules and traditions binding on Catholics, but on no one else ….

“To quote Mike Tyson, ‘Everybody has a plan until they get punched in the face.’ We’re about to see how good our plan is.” The Mayor of Tampa, Florida, upon hurricane Irma changing course toward Tampa and the rest of the Gulf Coast.

There is no epistemological Switzerland. (Via Mars Hill Audio Journal Volume 134)