And as a Catholic, I can quite honestly report that I have yet to be persecuted for my religious beliefs. I get a fair amount of pushback from secular friends who think I’m delusional, and conservatives who say I’m not a real Christian because I support reproductive choice and marriage equality, but I’ll say this — I am not writing these words from a jail cell. You know why? Because American Christians are not being persecuted.

Gosh! I had no idea it was so easy! All a “Catholic” needs to do to stay out of jail is go along with the people who (unlike the church you defy) actually have authority to throw you in jail — especially on their most holy groin pieties! Thanks, Mary Elizabeth!

If there are 10 people who have been accused, and under a reasonable like­li­hood standard maybe one or two did it, it seems better to get rid of all 10 peo­ple,” Polis said. “We’re not talking about depriving them of life or liberty, we’re talking about them being transferred to another university, for crying out loud. 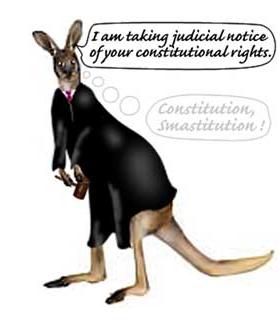 Sure, it’s no big deal to get thrown out of school and labeled a possible rapist. There are absolutely no meaningful ramifications for your education, your career, or your personal life. Incredibly, people actually applauded this nonsense. If universities actually adopted that position, however, I’d immediately resign from National Review, file an avalanche of litigation, and then pitch Rich story ideas from my new yacht, named Sue U.

“I’ve come to see somebody that’s not scared to say what he thinks, and he thinks like I think,” gushed Joe Smart, a security guard who was at a Trump event in Greenville, S.C., last month. “He’s religious, and from what I hear, he’s going to change the White House back to Christianity. I pray every night that our nation will come back to God.”

Bob Vander Plaats, an influential evangelical leader in Iowa and president of The Family Leader, said many religious voters see a kinship with Trump in his targets.

“It’s not surprising is that the enemy of our enemy is our friend,” Vander Plaats said. “That’s the art of political warfare. He’s calling out the establishment, the ‘media elite,’ and he’s calling out a lot of people.”

Robert Jeffress, pastor of the megachurch First Baptist Dallas, wrote that evangelical voters aren’t under any delusion that Trump believes the same as them. Instead, they’re just glad he’s closer to their beliefs than President Obama:

“No Evangelical I know is expecting Trump to lead our nation in a spiritual revival. But seven years of Barack Obama have drastically lowered the threshold of spiritual expectations Evangelicals have of their president. No longer do they require their president to be one of them. Evangelicals will settle for someone who doesn’t HATE them like the current occupant of the Oval Office appears to.”

(NPR) I don’t believe these quotes were made up.

Have I mentioned lately that one of the things I love about Orthodoxy is its sobriety?

I have never been a great fan of non-discrimination laws, particularly public accommodation laws. We have certainly seen their egregious abuse in the cases of the bakers, the florist, and the photographer. Even if one says (correctly) that “sexual orientation and gender identity” are bizarre items to add to such specially protected lists, and even if they were taken back off, I still tend to think that such laws do more harm than good, involving government in micromanaging every aspect of hiring or accepting a contract, attempting to delve into hidden motives, and in the end more or less requiring affirmative action in hiring so as to avoid costly lawsuits.

But despite my libertarian-ish leanings in that regard, I have also always said (as far as I know, consistently ever since I have been blogging) that it is completely appropriate for Christians and other non-PC groups to demand that such laws be applied to them consistently, otherwise we get the worst of both worlds: The baker is forced to bake the sodomy-celebrating cake, but the Christian employee can be harassed and fired for his un-PC, “bigoted” beliefs. That, of course, is what we often get anyway, and that status of ideological dhimmitude for us “bad guys” is exactly what the left wants. The left revels in double standards while usually not quite admitting doing so.

(Lydia McGrew) Mary Elizabeth Williams presumably would cut loose with another string of epithets if she read this (after all, they’re not beheading us by the dozen on Miami Beach),

but we Christians surely are being subjected to “hate speech.”

Now “hate speech” is a category just as dubious as our expansive anti-discrimination laws but if they want to play that game, we’ll give it back to them good and hard.

“In learning as in traveling and, of course, in lovemaking, all the charm lies in not coming too quickly to the point, but in meandering around for a while.” (Eva Brann)

I am a retired lawyer and an Orthodox Christian, living in a collapsing civilization, the modern West. There are things I'll miss when it's gone. There are others I won't. That it is collapsing is partly due to calculated subversion, summarized by the moniker "deathworks." This blog is now dedicated to exposing and warring against those deathwork - without ceasing to spread a little light.
View all posts by readerjohn →
This entry was posted in Discrimination, Evangelicalism, Justice, Legalia, Marriage (real), Pinch of Incense, Political Matters, Religious freedom, Sexualia, Speech & Press and tagged persecution. Bookmark the permalink.
%d bloggers like this: