[A]s James Baldwin put it, Americans were “afflicted by the world’s highest standard of living and what is probably the world’s most bewilderingly empty way of life.”

(Pankaj Mishra, America, From Exceptionalism to Nihilism) That quote was new to me, though the thought was not. My “standing advice” at the end of each blog episode includes these:

The consumer society is in fact the most efficient mechanism ever devised for the creation and distribution of unhappiness. Lord Jonathon Sacks, chief rabbi of Great Britain.

I think a great many of us are haunted by the feeling that our society, and by ours I don’t mean just the United States or Europe, but our whole world-wide technological civilisation, whether officially labelled capitalist, socialist or communist, is going to go smash, and probably deserves to. W.H. Auden, 1966.

Then I also read this today:

While the news waves groan with stories about “America’s Opioid Epidemic” you may discern that there is little effort to actually understand what’s behind it, namely, the fact that life in the United States has become unspeakably depressing, empty, and purposeless for a large class of citizens.

… None of the news reports or “studies” done about opioid addiction will challenge or even mention the deadly logic of Wal Mart and operations like it that systematically destroyed local retail economies (and the lives entailed in them.) The news media would have you believe that we still value “bargain shopping” above all other social dynamics. In the end, we don’t know what we’re talking about.

But one of the odd blogs I find irresistible is Granola Shotgun. “Johnny” populates his blog with loads of photos and sparse commentary. Most recent:

At the end of my first year at university I was approached by an engineering student who asked if he could be my room mate next year. We didn’t know each other particularly well and didn’t have much in common, but he seemed harmless enough. I shrugged. Sure. We went our separate ways over the summer and in September he appeared at my door. After a few months of successfully sharing accommodations I asked him why he came to me when most guys in his situation would have gone in a very different direction. He explained.

The average college freshman tends to have an adolescent understanding of what a good independent life might be like. Young men are motivated by peculiar impulses and the siren song of the frat house calls. Beer. Parties. Girls. Sports cars. The prestige of hanging out with rich kids, athletes, and really popular older guys. He said that was usually a big mistake. The furniture is made of plastic milk crates. The place smells like a locker room. People eat ramen and cold day old pizza out of the box. They wear flip flops in the shower because no one has ever cleaned the bathroom. Ever. And when you bring a girl home there are a dozen bigger richer guys with fancier cars than you hovering around. You sit there trying to get your romance on with posters of naked women taped to the walls next to a collection of empty bottles. And you pay extra for all this… It’s just not a great situation.

Then he made a sweeping motion with his hand indicating our apartment. A pleasing mixture of antiques and modern pieces. Smells like lemons. When he brings a girl home I’m in the kitchen cooking brisket and home made bread. Soft lighting. Ella Fitzgerald is playing in the background. No competition. And it’s cheaper. For him, doing the unorthodox and socially uncomfortable thing was just… rational. [Yup. That sounds like an engineer’s approach to the world. Tipsy]

Back to Springfield. Steve [and Liz Shultis] took a version of the same strategy. He and his family live in a gracious four story French Second Empire mansion. The place is huge and everywhere you look there’s a level of detail and quality you can’t find in any home built today. There’s a legal apartment on the lower level that they use as a guest suite.  I looked up the address on a real estate listing site and he paid less for this house than many people spend on their cars. His family has a quality of life and a degree of financial freedom that none of his suburban piers (sic) can comprehend.

Most people load themselves up with massive amounts of debt in order to live the way they believe they’re supposed to. You wouldn’t want to put your kids in a substandard urban school with the wrong element. You wouldn’t want to buy a house that never appreciated in value. You wouldn’t want to have to explain to your friends, family, and co-workers that you live in a slum with poor black people and Puerto Ricans. And where do you park?! It’s so much “better” to soak yourself in debt to buy your way in to the thing you believe you can’t live without. 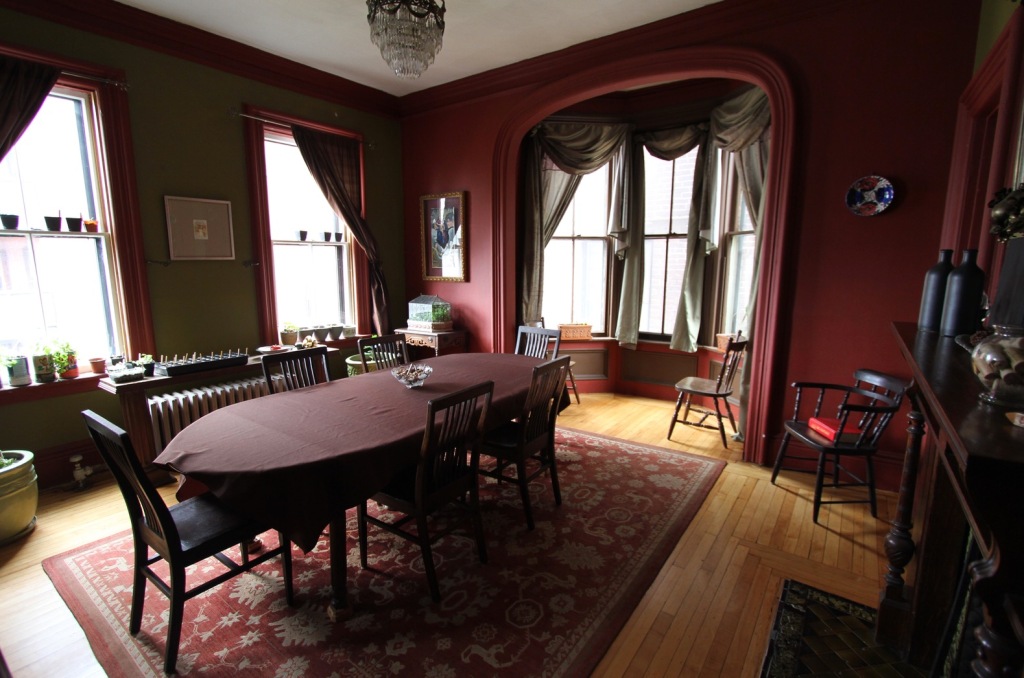 From their own blog, it appears that Steve & Liz (perhaps Steve and his ex) actually did raise children, now adults, in that urban environment, though the children are not visible or mentioned in Johnny’s story.

I don’t want to romanticize, let alone make a panacea of, a good, walkable and sociable living environment, but it appears (scroll on down the long page) that the urban dwellers of Springfield, Massachusetts may have escaped some aspects of the “bewilderingly empty way of life.”