Hydra seems to have sprung an extraordinary number of new heads yesterday. My inner Jeremiah just isn’t up to calling them all out, let alone pronouncing all the Woes.

Did you really think that we want those laws observed? . . . We want them broken . . . . There’s no way to rule innocent men.  The only power any government has is to crack down on criminals.  Well, when there aren’t enough criminals one makes them.  One declares so many things to be a crime that it becomes impossible to live without breaking laws.  Who wants a nation of law-abiding citizens?  What’s there in that for anyone?  But just pass the kind of laws that can neither be observed nor enforced nor objectively interpreted — and you create a nation of lawbreakers — and then you cash in on guilt.

(Ayn Rand, Atlas Shrugged) The list of federal criminal laws imposing “strict liability” – that is, not requiring any guilty state of mind – grows on an on, eliciting a reprise of this classic thought.

If I call myself a liberal, I claim to uphold the principle of individual liberty. It may well be that liberal policies actually destroy liberty, but that is a problem with the use of the term “liberal,” and not with the nature of the term itself. If I call myself aconservative, I claim to uphold the principle that tradition is a source of wisdom from which we dare to swerve only with great reluctance. It may well be that policies called conservative actually destroy tradition, but again, the problem lies with usage, and not with the nature of the term. I am a localist, because I believe that local government and local groups should do most of the practical governing in our lives—the educating of children, for instance, keeping the peace, and celebrating feasts. I am a distributist, because I advocate a wide distribution of personal property. Some people are monarchists, some people are republicans, some people are even anarchists. But what is a progressive?
…
It implies only that the user thinks well of himself and not so well of other people, particularly his own forebears, whom he by definition wishes to leave behind.
The progressive, as it seems to me, is therefore always in a position of impiety ….

Speaking of “progressives,” James Howard Kunstler asks again “where is the Tea Party of Progressives?” He then adds “Why are the Nascar morons and Jesus jokers the only people in this country who can mount an aggressive political movement? Will somebody please step up and take the baton?”

From somewhere to Kunstler’s right (I think; it’s hard to tell Left from Right these days), Rod Dreher echoes “There used to be an American Left.”

The magisterial Walter Russell Mead joins the throng, and probably  asks it best:

The 2008 financial crisis was, from a left point of view, the perfect storm: greedy bankers in cahoots with corrupt politicians made obscene bonuses while engaging in an orgy of speculation that almost wrecked the world financial system — and then stuck the taxpayers with trillions in losses.
So why didn’t voters turn left? Why aren’t bankers hanging from the lamp posts while unions make record gains? Why did the GOP surge in the 2010 elections, and why aren’t we well into another period of progressive political hegemony? Why is all the talk about the crisis in government debt and the need for government restraint when private irresponsibility was the cause of the crisis?

There’s another man about to be executed and the press could hardly care less than it did last week.

I suppose it might matter that the man is guilty and doesn’t deny it.

But the “crime” is “apostasy”: leaving Islam for Christianity, in a country, Iran, that has had no such executions for 21 years now. (HT Mirror of Justice,Get Religion)

Rod Dreher seems to think it’s important to distinguish economic peak oil from geologic peak oil. Since he’s a perceptive guy, he probably has noted that peak oil deniers are making hay by pointing to proven reserves (a point I’d missed), so I thought I should pass his distinction along.

But when it takes a barrel of oil to extract another barrel of oil from the ground, will the deniers feel vindication that there’s still, technically, useless goop down there somewhere?

It always made me cringe when conservative Christians called some racy network TV show “hardcore pornography.” Heck, I’ve seen a lot of smutty TV, but never hardcore. Playboy’s not even hardcore (last time I looked, long ago). TV to Playboy is the gamut from smutty/smirking to soft core. What room does that leave for Hustler and Marilyn Chambers?

Do liberals cringe when a guy like Andrew Sullivan – ostensibly Catholic but above all, gay, gay, gay – brands as “Christianist” the pacifist Bruderhof because it opposes gay marriage? What room does that leave to Bruderhof’s “right”?

Jason Peters at Front Porch Republic dissects Michael Oakeschott’s view of school as “A Place Apart,” and finds much to admire, but also some things to trouble and, ultimately, to reject. Not surprisingly, considering the Internet domain where it’s published, Peters’ rejections include Oakeschott’s deprecation of particularity and limits as things invariably to be transcended.

You may need to “click to embiggen” this to read it. 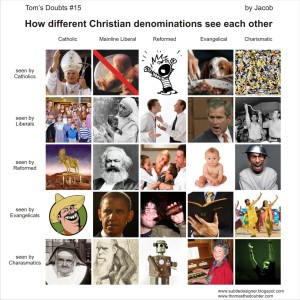 “I write so that I can find out what I think.”

I can’t remember where I heard that, first – I think it may have been überblogger Michael Hyatt (who I don’t link to often because he’s so darn chipper, and much of what he blogs on in publishing and marketing stuff) – but I find it true.