In May 2019, I spent a bit over a week in Georgia, in the Caucasus, east of the Black Sea and bordering Russia, Turkey and Armenia. I went under the auspices of First Things Foundation, an Orthodox economic development charity, which raises a little money taking people to places where they have (or in this case, were placing) field workers.

I had to wait until after the Spring Concert of a group I sing in, but then off to Chicago, on to Lufthansa, and Tbilisi about 16 hours later after a Frankfurt transfer. Most of my mates had already been knocking around a few days.

First Things Foundation isn’t a travel agency or tour guide and it was not a fancy tour. We stayed in no proper hotels, and one of our places was up four flights, no elevator.

May 11, overlooking ‎⁨Tbilisi⁩, ⁨Georgia⁩, from Turtle Lake Ascent, where we … 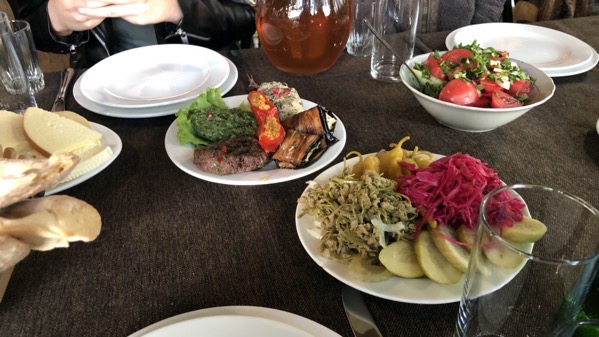 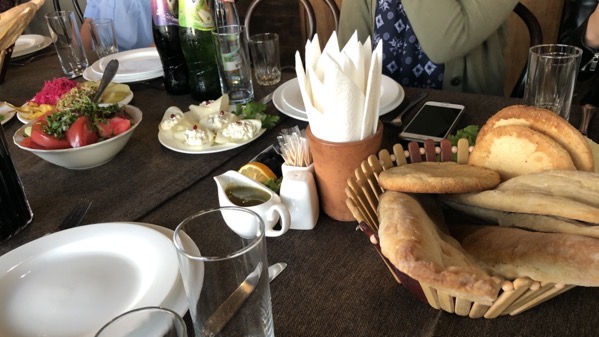 … feasted at our first “Supra,” where tradition calls for 16 (I think) toasts. I was fewer than 4 hours on the ground at this point, after a long flight, and am not a big drinker anyway. But I survived pretty well. 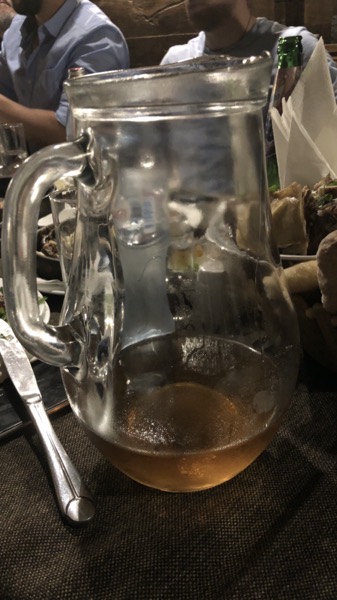 These Kool-Aid pitchers are wine. There were many of them …

… and they lasted into the night — but not too late to keep me from Church on Metekhi ascent, where (alas!) I have only a video which won’t embed, apparently.

Later, we made our way toward Stepantsminda, but stopped, too close to Tbilisi for the geotagging to specify, for this old church: 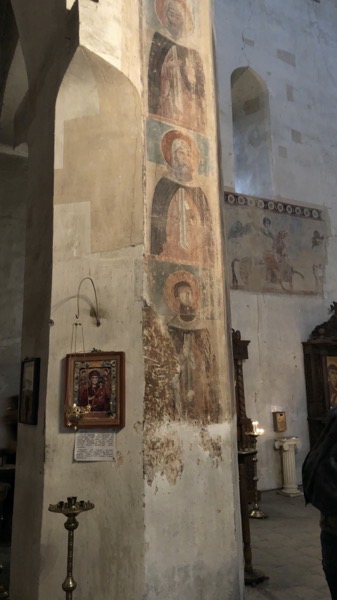 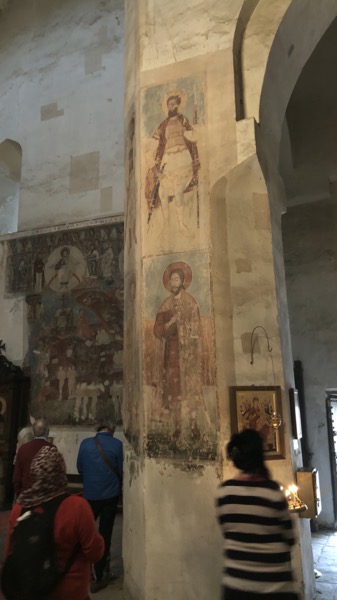 It’s a long, long way to Stepandsminda, on the Russian border, but for one thing we didn’t need our guides, as it sported the World’s Best Ideogram (zoom in if necessary):

Spring in this region comes late. 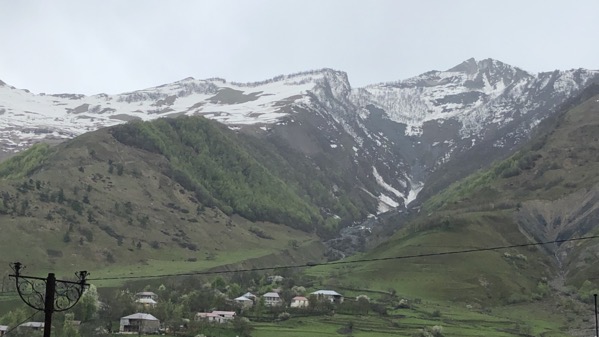 Our destination was Qazbegi, which I think is probably a regional name, which includes Stepantsminda (named for St. Stephen). Georgia is northern neighbor of Armenia, the oldest Christian nation, and became Christian soon after Armenia – in the early 4th Century. It is reportedly (but you know how those Chambers of Commerce are) the birthplace of wine. We have it on greater authority that it is the birthplace of Stalin, but never mind.

We were in Stepantsminda two nights, to attend a wedding and reception for one of the First Things Foundation fieldworkers. He was marrying a Russian doctor, who he met in Central America, and they chose Georgia to minimize visas and other hassles for Russian and American friends and family.

The wedding was in a monastic church, up the mountain, a mere stone’s throw from Russia. 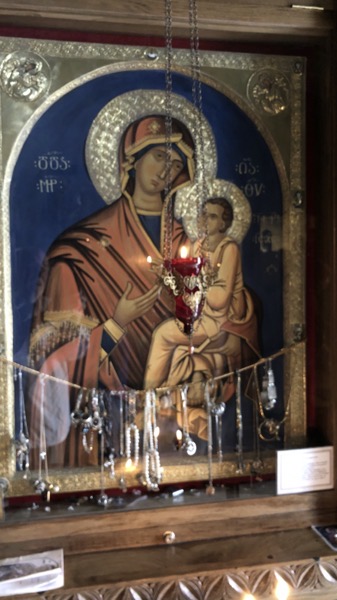 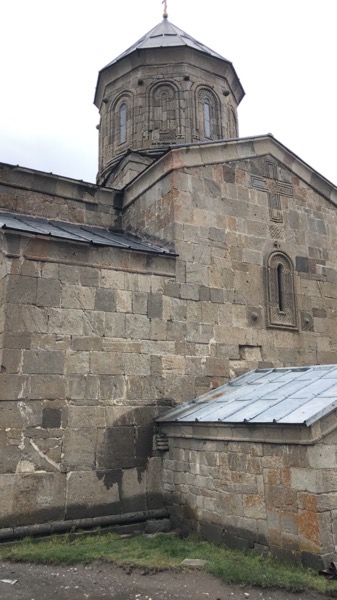 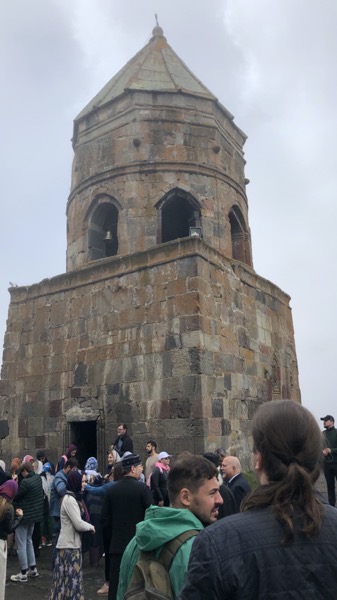 The bride was late, coming from Tbilisi in bad weather, with the vocal ensemble that sang sacred Georgia Chant for the wedding, popular songs (even Hotel California) at the reception, so we had ample chance to look around, and the breaking weather made for a spectacular photo of the couple.

Area scenery. The monastery church is visible near the top of the near mountain in the first photo: 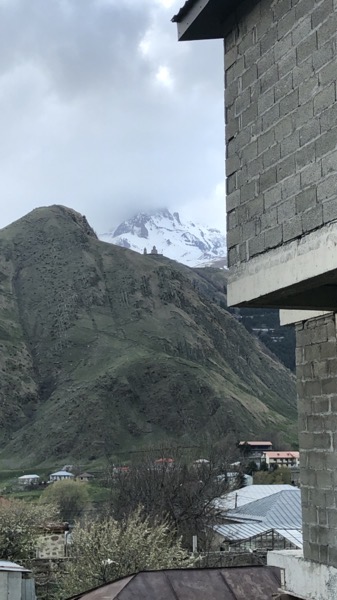 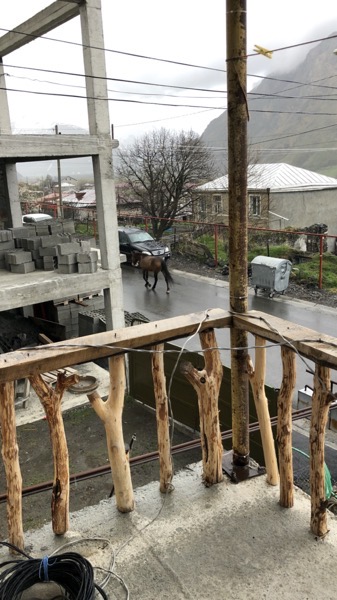 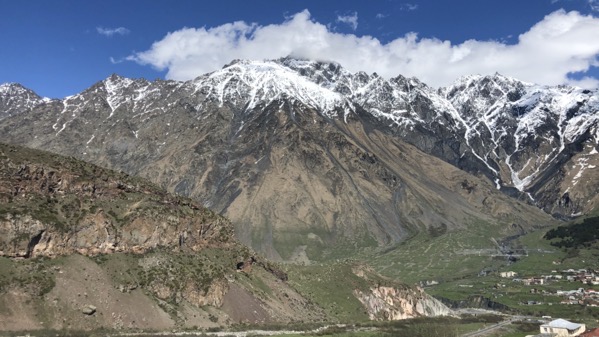 That was my boarding house to the right in the last photo.

Breakfast place (Shorena’s Bar in Stepantsminda) and company, I’m on the right. 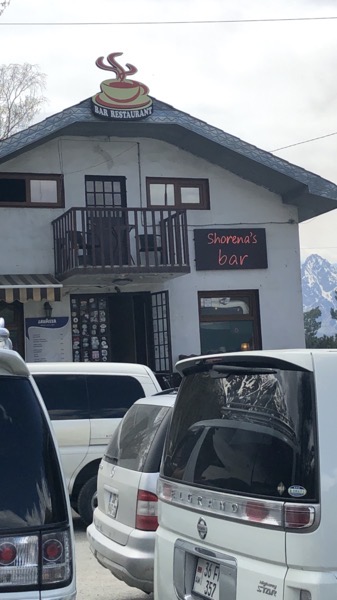 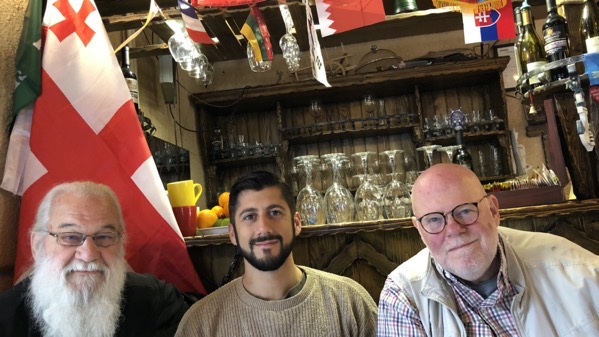 The day after the wedding, we made our way to Svetitskhoveli in Mtskheta, the old capital of Georgia. Our Boarding house was a durn siight nicer than the one in Stepantsminda … 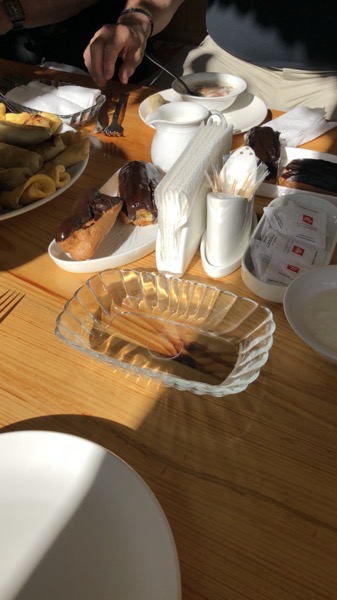 … but the highlight for me —not just of Mtskheta but of the whole trip — was the old cathedral (where I believe Patriarch Ilya still resides on the grounds) and making the acquaintance of St. Gabriel, a Fool for Christ, who reposed in Christ in 1995.

Saint first (I couldn’t resist buying this icon), Cathedral photos follow. There are many more I didn’t publish here and many more on the web, some better than any of mine. 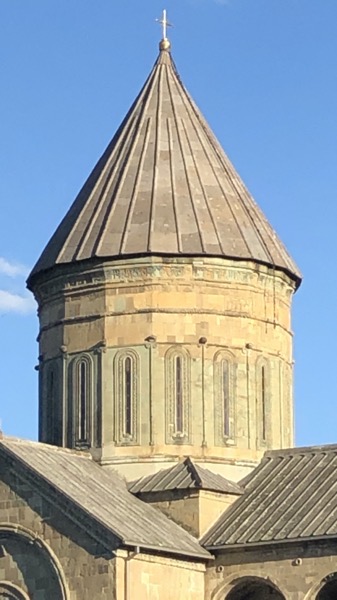 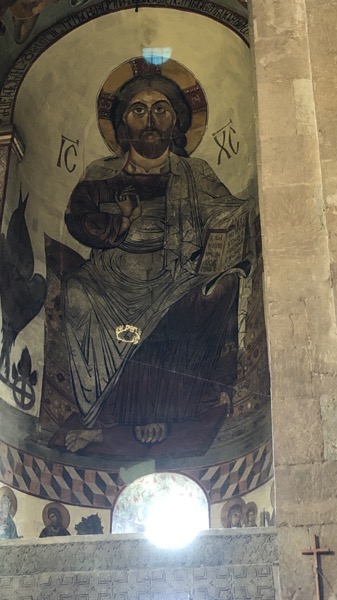 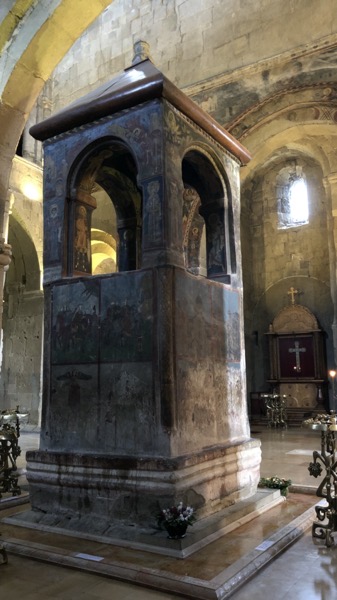 We hung around Mtskheta and environs for much of a day, including a nice alfresco lunch. 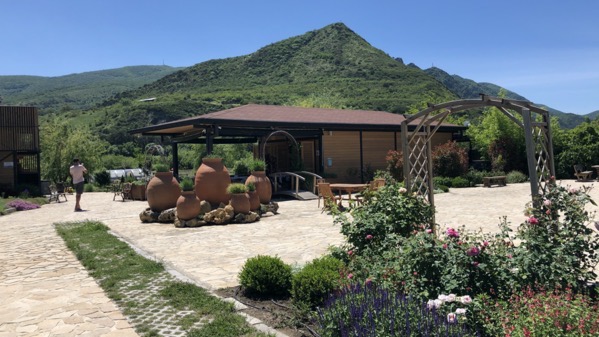 Georgia seems to have churches everywhere you turn, many of them a thousand or fifteen hundred years old. I could not keep track and geotagging isn’t very specific in rural Georgia. So here’s a little scenery and a lot of church from later in the trip. 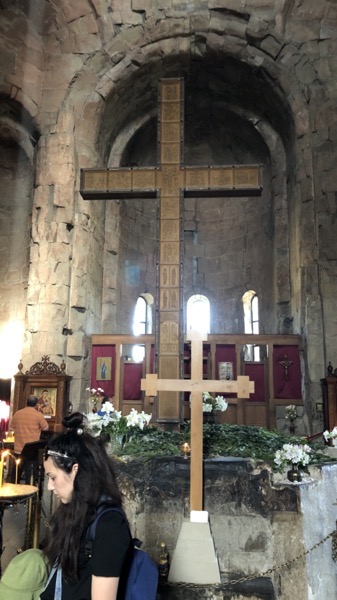 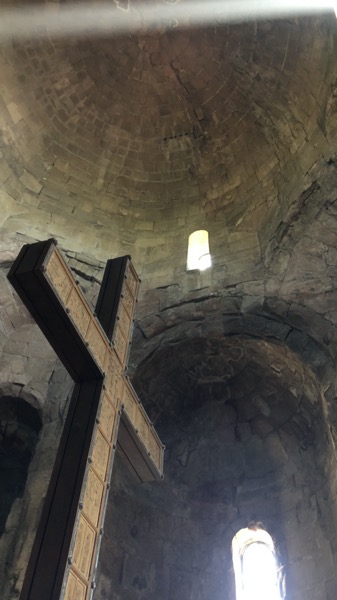 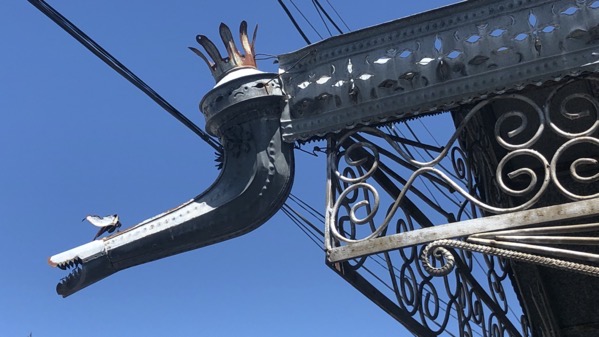 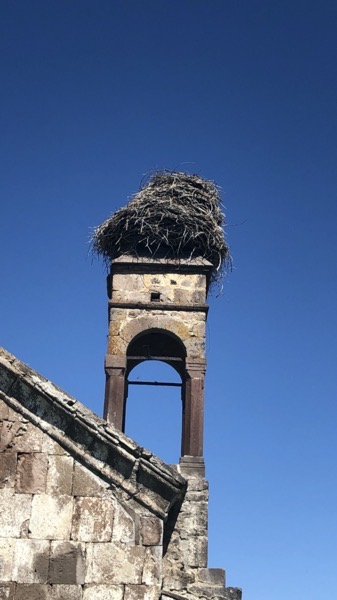 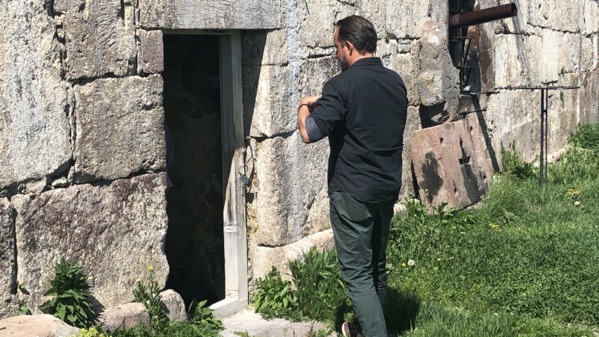 St. Nino, a woman, is virtually the founder of Georgia’s Church, and is venerated quite highly. Her distinctive cross is a Georgian marker: 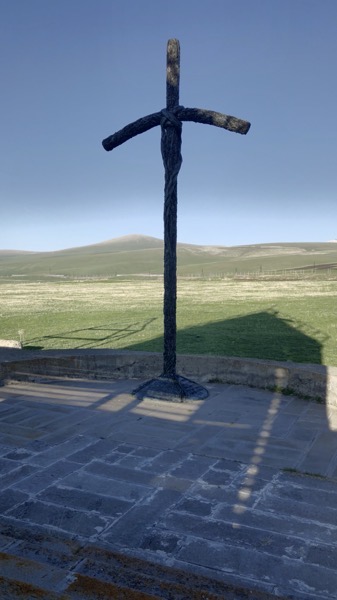 Back in Tbilisi, more sightseeing, including a Georgian Family Day celebration on the plaza of the new Cathedral.

A haberdashery for monks and clergy. 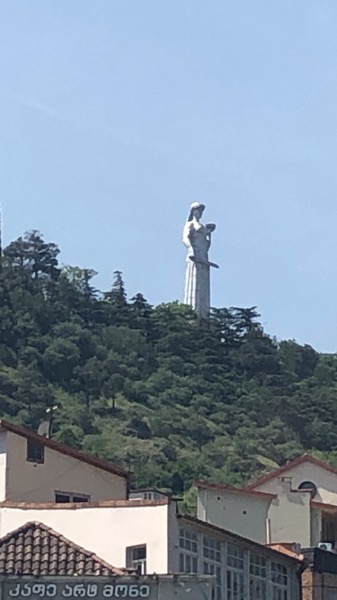 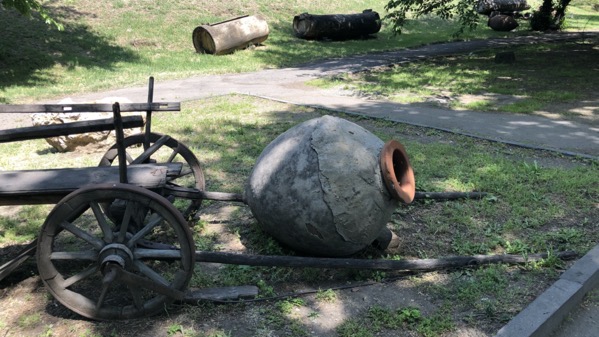 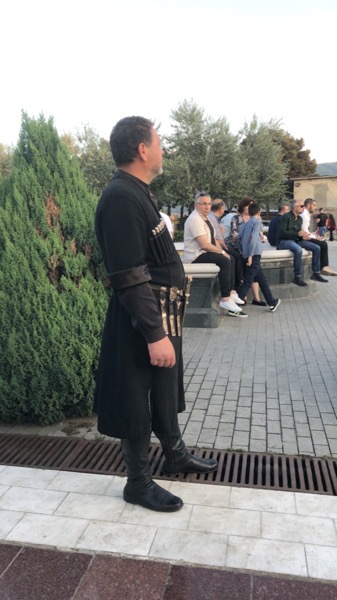 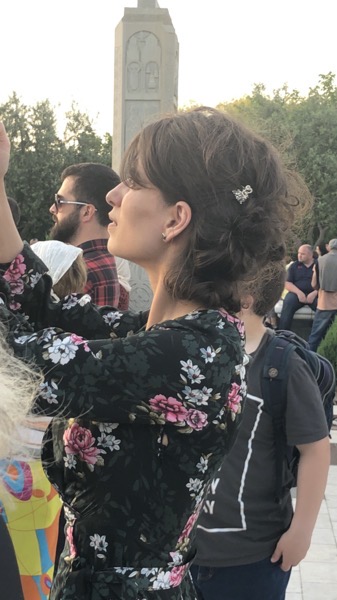 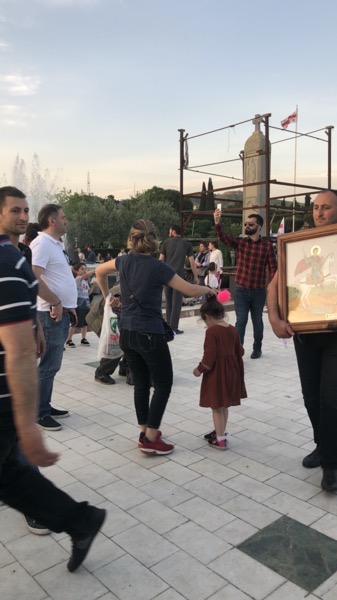 A luscious dish we should cook here: “Madame Bovary.”

I was plenty ready for home after almost 8 days in Georgia, mostly passively going where I was driven, but getting some solo Tbilisi walking in at the end. (By the way: I recommend Lufthansa very highly.)

I was raised Evangelical by parents who got their adult-convert Christian formation in a fundamentalist baptist church. In the 50s and 60s, our kind of Evangelicals followed the fundamentalist taboos: smoking, drinking, dancing, playing cards, and secret societies.

I say that to put in perspective my discomfort with Georgian-level drinking — not just the wines but a sort of moonshine brandy they call Cha-cha. A lot of my pleasure in this trip was attenuated by that discomfort, which involves some collateral stories best left untold.

My overall impression of Georgia and the Georgians is an ancient people and culture, deeply and historically Christian, but in a manner that confounds Church and nation to an extent unknown in the U.S. Similar confounding is found in Greece and Russia. Oh: they don’t do Fundamentalist/Evangelical taboos — for better or worse.

It’s above my pay grade to judge whether the Christianity suffers in the amalgam, but it certainly is different from being in a minority Christian tradition in the U.S.