Posted on September 8, 2018 by readerjohn 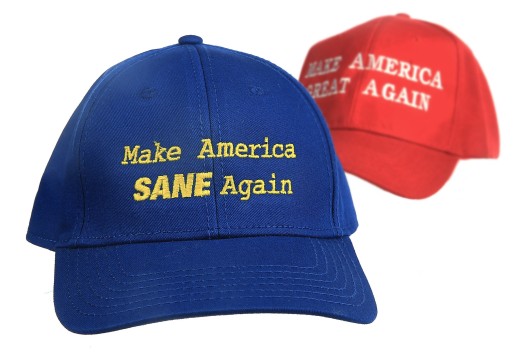 Where do I buy the hat on the left?

The next time you meet a candidate asking for your money, start the conversation with two questions. First: “When did you last change your mind on a significant political, economic or social issue, and why?” Second (if the candidate is already in politics): “When did you vote with the other side?”

In person, many of you are nuanced, balanced and sane in your overall political outlook, irrespective of whether you lean left or right. The problem is that you tend to care mainly about specific policy outcomes — killing the Iran deal, say, or acting on climate — and you’re willing to swallow your misgivings about the other stuff, like Donald Trump’s character or the Democrats’ Sandernista tendencies.

Sacrificed in the bargain is much concern about the tone of campaigns, the rules of politics, the process of policymaking, and ordinary considerations of collegiality and respect.

Let me ask you to think hard about the increasing cost of that bargain. A president who rages like King Lear on the heath because an op-ed in The Times was mean to him. Senate Democrats who cheerfully turn a Supreme Court confirmation hearing into a carnival show while they audition for the Democratic nomination. The collapse of regular order. The vanishing filibuster. The constant threat of government shutdowns. The ceaseless campaign that always comes at the expense of governance. The administrative state on which we increasingly rely to run things because elected officials can’t. The rush to the exits by the more honorable public servants.

This is the politics of maximum polarization and total paralysis, waged with the intensity of the Battle of the Somme and yielding about as much ground. Right now, you’re contributing to this. Stop.

There’s an alternative. Split more of your money between the parties. Fund candidates with proven or potential cross-party appeal. Help out politicians with scores below 100 percent from the N.R.A. or the Sierra Club. Set up a PAC — call it SanePAC or NotNutsPAC — to help candidates facing primary challenges from the further-right or further-left. Expand the reach of purple America at the expense of deep red or deep blue.

I, a Trimmer, endorse this message. I’d add that part of “the cost of the bargain” is bullshit “gotcha” attempts that make the Newspaper of Record look crypto-Resistant.

Almost all the excellent reporting of the last year and a half has also been fed by constant distress signals from within the White House, where grown-ups have had to contend with a psychologically disturbed, delusional, and hugely ignorant president, who has no capacity or willingness to learn.

Sometimes I think it’s useful to think of this presidency as a hostage-taking situation. We have a president holding liberal democracy hostage, empowered by a cult following. The goal is to get through this without killing any hostages, i.e., without irreparable breaches in our democratic system. Come at him too directly and you might provoke the very thing you are trying to avoid. Somehow, we have to get the nut job to put the gun down and let the hostages go, without giving in to any of his demands. From the moment Trump took office, we were in this emergency. All that we now know, in a way we didn’t, say, a year ago, is that the chances of a successful resolution are close to zero.

I can’t endorse much of what Sullivan wrote this week beyond these snippets.

Conservatives have long derided “activist” judges who, they argued, issued sweeping social policy without a popular mandate or widespread support. Such protestations helped propel a movement. They might do well to heed their own warnings.

Joshua Zeitz, concluding Why Conservatives Should Beware a Roe v. Wade Repeal. I only came across this because John Fea, who I’ve been following for a month or so, fell for it.

First, any “lack of popular mandate or widespread support” has little if nothing to do with conservative laments about liberal judicial activism. That is a straw man, pure and simple.

Thank you for letting me get that off my chest.

As for the rest, maybe I’m jaded by having spent too much time “in the trenches,” but it strikes me as targeted at a squishy and ignorant set of fence-straddlers. Zeitz’s con goes like this:

John Fea actually fell for the fallacy that reversal or overruling (not “repeal,” as in Zeitz’s title) of Roe would make abortion virtually illegal (“one can only imagine the strength of the counter-reaction should a conservative court all but criminalize …”).

Reversal of Roe would, in the overwhelmingly likeliest case, return the abortion issue to state legislatures, where the response would vary from complete bans on abortion (which would be widely ignored in “hard cases” after the signing photos were taken) to complete legality with public funding (can you say “California”?).

A vanishly unlikely theory would actually read an abortion ban into the 14th Amendment. The theory argues, in effect, that exploding understanding of fetal development and our early criminal abortion laws were contemporaneous with the 14th Amendment; so contemporaries, if asked, would have said “Why yes, now that you mention it, I guess fetuses are constitutional ‘persons’.” I’m not sure whether anyone is actually advancing this theory in any legal cases. I became aware of it from a third-tier law journal. I hope it’s recognized as “a bridge too far” invitation to conservative judicial activism.

Since neither Roe nor Planned Parenthood v. Casey was well-reasoned or highly principled (Casey effectively replaced Roe with a rationale that is even more patently mockable), I would be personally gratified by the restoration of some constitutional equilibrium through reversing that line of cases.

That reversal would, indeed, be followed by something approaching 50 fierce state legislative debates. The results in most states would be compromises that neither side liked. But that’s where the issue belongs, I believe.

Now: all that having been said, I have been persuaded that a likelier result than any reversal of Roe/Casey is continued chipping away.

It is, after all, not really within the control of “conservatives” — or of Donald Trump, despite campaign bloviating about what his nominees would do — whether bad “progressive” precedents from 45 years back stand or fall.

The Supreme Court, in whose control it is, does not disregard factors like a bad precedent having nevertheless become woven into the social fabric, or a reversal, howsoever well-reasoned, reinforcing the lamentable perception that the Courts are really just super-legislatures.

I’m betting nothing I can’t afford to lose on overruling of Roe in my lifetime.

Congressional G.O.P. Agenda Quietly Falls Into Place Even as Trump Steals the Spotlight. Very misleading headline if one thinks an agenda for Congress is more than confirming POTUS’s judicial nominees. There is no GOP congressional agenda revealed in this story.

Perhaps most concerning, Judge Kavanaugh seems to have trouble remembering certain important facts about his years of service to Republican administrations. More than once this week, he testified in a way that appeared to directly contradict evidence in the record.

For example, he testified that Roe v. Wade is “settled as a precedent of the Supreme Court.” But he said essentially the opposite in a 2003 email leaked to The Times. “I am not sure that all legal scholars refer to Roe as the settled law of the land at the Supreme Court level since Court can always overrule its precedent, and three current Justices on the Court would do so,” he wrote then.

Judge Kavanaugh’s backers in the Senate brushed this off by pointing out that his 2003 statement was factually correct. They’re right, which means that his testimony this week was both disingenuous and meaningless.

If the New York Times submitted this drivel as part of a resumé for a “Fact-Checking” position, I wouldn’t give them an interview.

Here’s a quote, via the Telegraph, from the prosecutor in the trial where Karen White admitted two indecent assaults against female prisoners:

“The defendant would stand very close to [the victim], touch her arm and wink at her. Her penis was erect and sticking out of the top of her trousers.”

I swear, I wasn’t going to pass along Rod Dreher’s story of tragic stupidity in the Anglosphere, but the Prosecutor’s remark toward the end was irresistibly classic trans gibberish.

I am a retired lawyer and an Orthodox Christian, living in a collapsing civilization, the modern West. There are things I'll miss when it's gone. There are others I won't. That it is collapsing is partly due to calculated subversion, summarized by the moniker "deathworks." This blog is now dedicated to exposing and warring against those deathwork - without ceasing to spread a little light.
View all posts by readerjohn →
This entry was posted in Abortion distortion factor, Journalism, Life political issues, Political Matters, the worst are full of passionate intensity. Bookmark the permalink.
%d bloggers like this: